The thistle ranks next to the rose in British heraldic importance. Although of ancient origin, as the rose, the reason for its importance remains largely a matter of mystery. The thistle grew wild upon the mountain sides and in the valleys of the British Isles, thriving in the cool, damp climate. Noted for its prickly beauty and tenacity through all adversity, it has long been a Scottish ethnic symbol, commonly known as “The Flower Of Scotland.”

According to ancient legend, the adoption of the thistle as a national symbol dates from the battle of Largs. In this battle one of the Danish invaders disclosed an attempted surprise attack on a Scottish clan by his cry of agony caused by stepping barefooted upon a thistle.

The earliest recorded appearance of the thistle was on silver coinage in 1474. At that time badges were most popular and largely used, particularly by the noble. Shortly after 1474 the reigning Scottish King, James III, chose the thistle for his own badge. By 1540 the thistle had become recognized as the national emblem of the kingdom. Also in that year a the Most Ancient and Most Noble Order of the Thistle was founded. 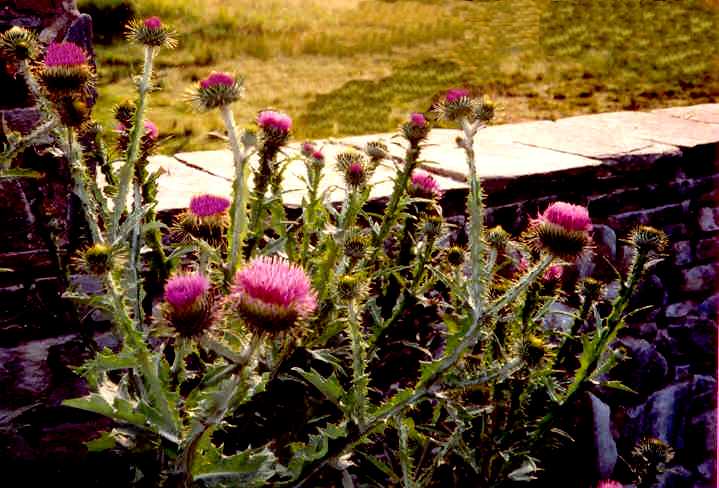 Thistles from Glenfinnan Monument, Scotland, taken in 1995 by Bob Howard