Clan Graham Society Past President Larry M. Nichols and Past Treasurer Joel Warren went on a pilgrimage to Santiago de Compostela during the fall 2012. Read their travelogue in the Spring 2013 edition of The Clan Graham News (downloadable from the Members Only archives).

Pulpo a la gallega—Galician style octopus­—originated centuries in the Galacian region of Spain. After the discovery of the Americas, returning explorers brought back chilies that were made into a fake spice—pimentó.  In English it was known as paprika. The paprika not only gives a copperish tinge to food, but it is also great for preserving food. This was especially helpful in times before there were frozen products or easy land transportation. Meat and fish products could be preserved without problems of rotting, molds or even worse. The octopus and paprika was combined with olive oil about 125 years ago when people went to fairs and other activities. Thus the name in Galician for pulpo a la gallega is “pulpo a feira” (fair-style octopus). This led to “pulpeiras” (places that specialized in octopus). The pulpeiras would cook the octopus in copper cauldrons and serve it diced on wooden plates. It is said that the copper pot gives the dish an incomparable taste impossible to obtain with any other material. Here is a recipe you will find tasty. 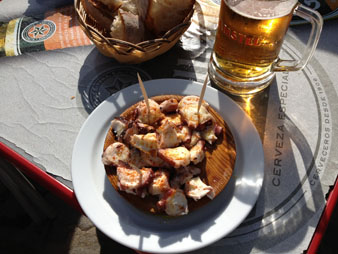 Fresh octopus must be softened. This may be done by beating it with a heavy object such as a rolling pin. You can also freeze it for two days and defrost it the day before cooking it (put it in a bowl because it will release a lot of liquid). Dice onion and add it to a pan with water. When it begins to boil, add the octopus. Grab its head and dip it in the pan three times. After the third dip, leave it in the pan. Cook for 50 minutes. Once cooked, remove the pan from the fire and let it cool for 15 minutes. Using the same water in which the octopus was cooked, cook the potatoes (previously peeled and diced). While they boil, dice the octopus in medium sized slices. When the potatoes are cooked, remove from water and add to a platter. Add the octopus slices on top. Add the olive oil and paprika and coarse salt. You can prepare vinaigrette previously or add the ingredients separately.

(Larry took the photo of the pulpo that he and Joel ate at the cafe-bar at the hospital in Spain.)

Several eateries in Santiago, Spain, serve an almond cake in honor of their patron saint, St. James. The sweet treat is called “Tarta de Santiago” and features his cross as a decorative topping with powdered sugar. 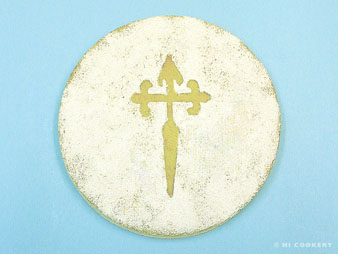 In a large mixing bowl, beat the eggs with the sugar until smooth. Add the butter, flour and water. Mix until well blended. Add the almond flour/meal. Stir in the grated lemon rind. Pour the batter into a greased, 10-inch round cake pan. Spread evenly for a smooth top. Bake in a preheated oven at 350 degrees F for 30-40 minutes until golden brown, testing with a toothpick for doneness. Remove from the oven and cool completely on a wire rack over another baking pan to catch the crumbs and powdered sugar. Print and cut out a graphic of the St. James cross. Center it on top of the cake. Sprinkle powdered sugar over the top of the cake using a sieve. Carefully remove the paper cutout with tweezers.

(For more step-by-step photos on how to make Tarta de Santiago, click on the cooking blog HI Cookery. Photo of the cake is used with permission.)