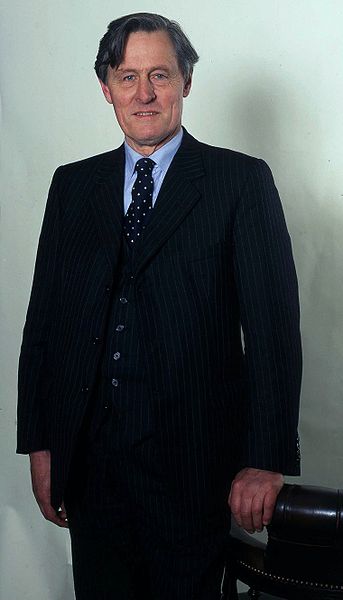 His Grace was born on April 6, 1935, in Rhodesia/Zimbabwe, Africa, where his father, then the Marquis of Graham, went to establish his career independent of the social ladder which operated in the United Kingdom at that time. The Marquis and his wife were carving a farm out of the African bush. In an effort to escape the attentions of the mosquitoes, the family’s first home was two round mud huts situated on a kopje. It turned out that the situation was not really suitable for young children. After some illness, the Duke and his sister were returned to Great Britain.

The Marquis had attained the rank of Lieutenant in the Royal Naval Volunteer Reserve. At the outbreak of the 2nd World War he joined the Royal Navy and entrusted his farm to a manager. He saw action in the battle of the Mediterranean and duties on the Russian convoy patrols.

His Grace attended two boarding schools. The first had been evacuated to Aberdeenshire for the duration of the war and the second was Loretto School near Edinburgh. The school emphasized a physically tough and Spartan regime, but it also enabled him to learn piping and highland dancing. The former activity has now been passed on to his two sons.

After leaving school, he traveled widely as a volunteer worker. He visited many countries where he took a special interest in the efforts of many of the young countries that were trying to establish their independence and democracy. This was part of various initiatives coordinated by Moral Re-Armament (MRA).

In 1962, he returned to Scotland to oversee some of the family farms and estates. He was finally given full responsibility in 1984. He has been active for many years in his local branch of the Scottish National Farmers Union including serving nine years on the National Council. In 1997, he was President of the Royal Highland and Agricultural Society and has many rural interests.

In 1970, he married a Canadian of Scottish descent, the late Catherine Young, whose father, a Rhode’s Scholar, founded Ravenscourt School in Winnipeg and was one of those killed in the Dieppe Raid of 1942. They have a daughter and two sons – Hermione, James, and Ronald. Hermione is married to Christopher John Thornhill, has twins, and is a psychologist and the President of the Preshal Trust, a charity based in Govan, Glasgow. James (Jamie), the Marquis of Graham, has now taken over the running of the Graham Estate in Scotland and has spent several years promoting renewable energy and anti-pollution measures in China. He speaks Mandarin fluently. He has directed energy exchanges in Europe and now has a position in the UK government. Ronald married Florence Arbuthnott in 2016, has two boys and is a lawyer practicing with a firm in England.

After the death of his father in 1992, His Grace took his seat in the House of Lords and participated in the debates on Scottish devolution and the reform of the House of Lords. In 1999, he was the only Duke elected to remain in the interim House along with 92 other hereditary peers. The Duke is currently the senior peer in government in the House of Lords with roles in farming, fishing, forestry and the environment.